Terrel Jones works from her home studio in the mountains of Troy, Montana, where she has painted as well as taught high school art and Spanish since 1983. A child of the forests, she has spent most of her life living and traversing the lush spaces of the northwest, spaces that have found varied reflection in her work.

For the past ten years, Terrel has concentrated on painting landscape, with an emphasis on exploring texture, color and patterning. She strives to investigate the answers to the universal questioning of man’s ability to fairly co-exist in the natural world, to live comfortably and honestly while still honoring nature.

Daughter of a logger, Terrel remembers Sunday afternoons spent at her father’s job sites, the foundation of a life to be lived with the trees: under them, among them, in them. You will see this presence of trees in many of her recent works that emphasize the texture and color of tree bark, the spaces between branches, the composition of roots.

But it was ten years teaching and living without trees in the barren, dry landscape of coastal Peru

that further informed her intense interests in color and pattern. She remains heavily influenced by South American Native art.

Currently, she is painting a series devoted to the mature female form, finding ways to connect the beauty of the form with the beauty of the spirit of real women, women with physical imperfections and in some cases debilitating limitations. These paintings work to reflect a “groundedness” Terrel sees in mature women, a stability and hope in the logic of mature women. This work stands as a contradiction to the often common emphasis she sees throughout our culture on false outer physical forms. This series is a testament to honoring the interior self and releasing the impossible yearning for something that cannot be. 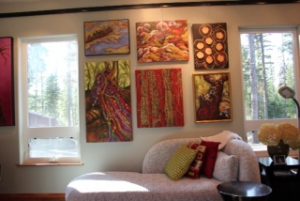 Drawn to painting because it is “immediate, colorful and juicy”, Terrel enjoys the physicality of the art: the brush stroke interaction with the canvas, the mixture of color, the spontaneity of redirection as a painting emerges at her fingertips. Besides painting, Terrel has previously worked in batik and pottery.

Terrel began her study of art informally with three years at Western Washington University. Upon her return from Peru in 1979, she attended Western Montana College, completing an Art Education degree in 1983. She advanced her study of art at the University of Montana, earning a Masters in Art in 1999.

Terrel exhibits throughout Montana and Idaho, with additional pieces in Ireland, Washington D.C., and California.